How to Make Dumplings From Scratch

Yesterday, my homework was to describe a process. My teacher said that recipes were not good, because they were too easy to describe. However, he had talked about recipes as an example for the last class.

Thinking it was okay to describe a recipe, almost half of students wrote recipes. I was one of them as well, so I wrote how to make Chinese dumplings. Teacher asked each student what to write and a Chinese woman who sat behind me answered. She told the teacher she was writing about dumplings. Moreover, a Taiwanese student and another Chinese student had same answers. It was a little funny. Did all the Asian students write about dumplings recipe?

Talking to the woman who sat behind me during break time, I enjoyed sharing the difference between Japanese and Chinese dumplings recipe. One of the difference was that I used pork belly as fillings, and she used beef and mutton. In the class, we should have compare our written recipes each other. I bet it would have been more fun.

Here is the dumplings recipe I wrote.

How to Make Dumplings From Scratch

Today I’m going to introduce you to how to make fried Chinese dumplings from scratch. I usually use the recipe of Wu Wen, Chinese cooking expert famous in Japan. Homemade dumpling skins are more chewy and tasty, and homemade fillings are more juicy than ready-made dumplings. The tools you need is two large bowls, a measuring cup, a measuring spoon, knife, cutting board and a frying pan with a lid.

First, in a large bowl, put 100g(1 cup) of all purpose flour and add 50cc(1/5 cup) of hot water at once, stir quickly with chopsticks and make the dough. Then, knead the dough in the bowl, and pull it together into a ball. Let the dough rest 20-30 minutes, covering it with plastic wrap.

Meanwhile, make the fillings. Put the ground pork, fine chopped cabbage, grated ginger into another bowl. Add tablespoonful each of sake, soy sauce, oyster sauce, and sesame oil. Mix it well, and the filling is ready.

Next, spread the flour over a board, then knead the dough on the board until its surface becomes smooth and silky. Cut the dough into halves, and shape them to a long, narrow stick. Cut them into 2cm(0.8 inches) wide pieces. Place each small lump of dough on a floured board, and roll them with your palm. Pat each dough into 10cm(4 inches) round with a rolling pin, and make the skins.

Then, place a teaspoonful of filling on a skin, fold into two equal halves, and seal it from the center to an end. Make the rest of the dumplings as the same way.

Finally, put the oil into a pan with strong fire on the stove, and place dumplings. After they get slightly browned, add some water and put the lid on. Cook 5-6 minutes until water runs out.

Place it on a dish, serve it with preferred sauces. Now it’s ready to eat! 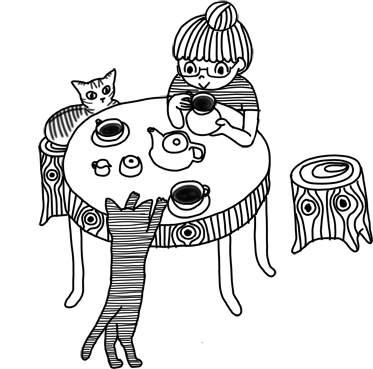